Share Your Sand Tiger Shark Images
What Is Spot A Shark?
A Shark USA is a citizen-science program that engages anyone who spends time on the water in sand tiger shark research along the Atlantic coast. Divers, snorkelers, and others are asked to photograph encounters with sand tiger sharks and post their images to the Spot A Shark USA website. Scientists then use unique spot patterns visible along the sides of the photographed sharks to identify individual animals. Identifying individual sand tiger sharks helps track shark movement and behavior over time. It also determines which coastal habitats sand tiger sharks use during their lives. This information is used by Spot A Shark USA researchers, as well as international partners, to facilitate management decisions aimed towards conserving sand tiger sharks, which are critically endangered in several parts of the world.

SEARCH FOR MY SHARKS 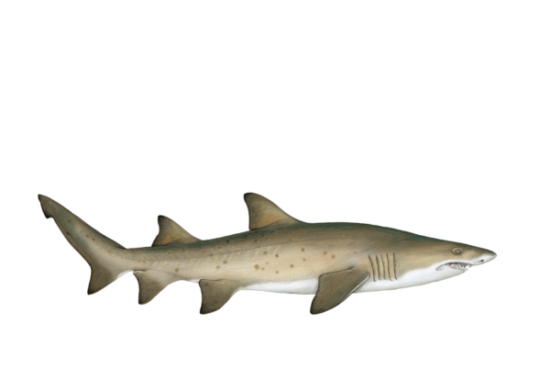 About the Species
Sand tiger sharks (Carcharias taurus) are highly-migratory, large coastal sharks found in many parts of the world. These sharks, which primarily eat fish, rays, and small sharks, have several prominent, identifying features, such as brown spots on their sides that help distinguish individuals and an iconic ‘ragged-tooth’ smile, making them ideal subjects for underwater photographers. Along the east coast of the US, sand tiger sharks often occur in large aggregations of 20-80 individuals. They are about 3 ft long at birth and can grow to 10 ft as adults. Sand tiger sharks often appear to hover motionless because they control their buoyancy using not only their large, oily liver, but also air that they gulp from the surface.
Sand Tiger Habits
While sand tiger sharks are known to occur in a variety of shallow coastal habitats, little is known about which habitats sand tiger sharks in the northwestern Atlantic use during their different life phases.

Adults: Adults are presumed to migrate seasonally between northern summertime and southern wintertime habitats, although some sharks may use habitats off North Carolina, USA as year-round habitat.

Sand tiger sharks often occur in aggregations of 20 to 80 individual sand tigers, and likely contain complex social networks. Important unanswered questions remain regarding how sand tiger sharks use coastal habitats. Images uploaded to Spot A Shark USA will help fill these knowledge gaps about what habitats sand tiger sharks use over time.
Sand Tiger Reproduction
Sand tiger sharks have one of the lowest reproductive rates among sharks because they exhibit delayed sexual maturity (6-7 years for males, 9-10 years for females), have a long gestation time (9-12 months), and produce 1-2 pups every several years. Unlike other sharks, female sand tigers have two uteri. Within each uterus, intrauterine cannibalism, where larger pups consume weaker siblings in the womb, occurs. The slow and unique reproductive strategy of sand tiger sharks, which may live up to 17 years in the wild and over 25 years in human care, makes sustaining populations of these sharks challenging. Data gathered with Spot A Shark USA will provide important clues as to where and when these sharks are mating, breeding, and giving birth.
Distinguishing Individuals
Life Phase : Juvenile and adult sand tiger sharks can be distinguished by their size. Juveniles are smaller than adults, with < 4 feet length, whereas adults are larger with > 4 feet fork length. The fork length is the distance from the snout to the base of the caudal fin.

Sex: While male sharks are usually smaller than female sharks, the best way to tell a male from a female is by looking at the underside of the shark. Male sharks have appendages called claspers on their underside. Claspers are modified pelvic fins that are used to insert sperm into female sharks during mating. In contrast, female sand tiger sharks do not have claspers. 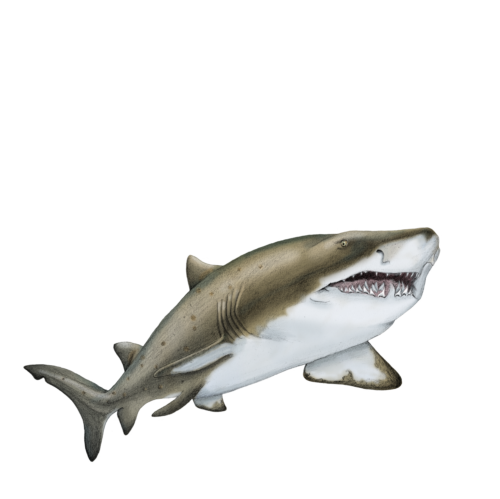 Species Conservation
Sharks are marvels of natural selection with remarkable adaptations that evolved over 400 million years to play a critical role in marine food webs and ocean health. Our understanding of sharks is ever evolving. Active research projects, such as Spot A Shark USA, assist scientists in gaining valuable information to support effective, science-based conservation for shark species, such as sand tiger sharks. Due to overfishing, numbers of sand tiger sharks have declined globally. In some locations, sand tiger sharks are listed as “critically endangered.” In the northwest Atlantic Ocean, for example, the species is listed as “vulnerable.” By supporting this project, you are helping researchers and the NC Aquariums gather valuable data, which may help provide long-term protection for sand tiger sharks and their habitats.
Links To Learn More
Sand Tiger Shark Reproduction
Sister Program: Spot A Shark Australia
Nursery Grounds
IUCN Red List
NMFS
AZA SAFE